Beer Half Marathon. Man VS BEER

Man VS BEER
For a few years now I have been intrigued by the beer mile.  I realize it's a stupid thing to do but it's fun and you make a few smiles, some great memories and raise a bit money for charity that's when stupid transforms into awesome. 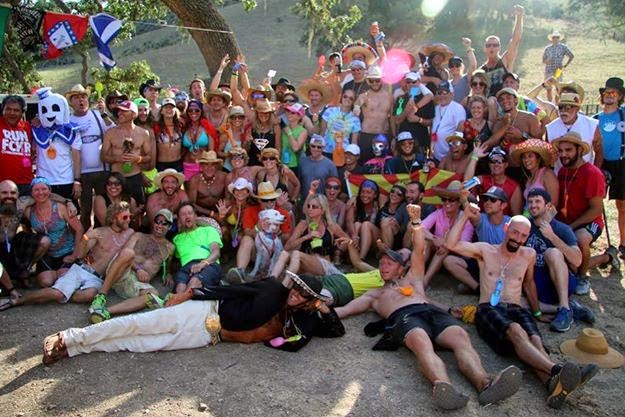 I was to host the 2nd annual 2014 Born to Run Beer Mile (otherwise known as the Intergalactic Beer Mile Championship of the Universe) In an effort to raise money to help support a few Tarahumara runners.
But that race report will have to wait till later.

First things first.
A few weeks ago some dude finally broke the elusive 5 min barrier and my facebook account became flooded with messages egging me on to try and beat it. 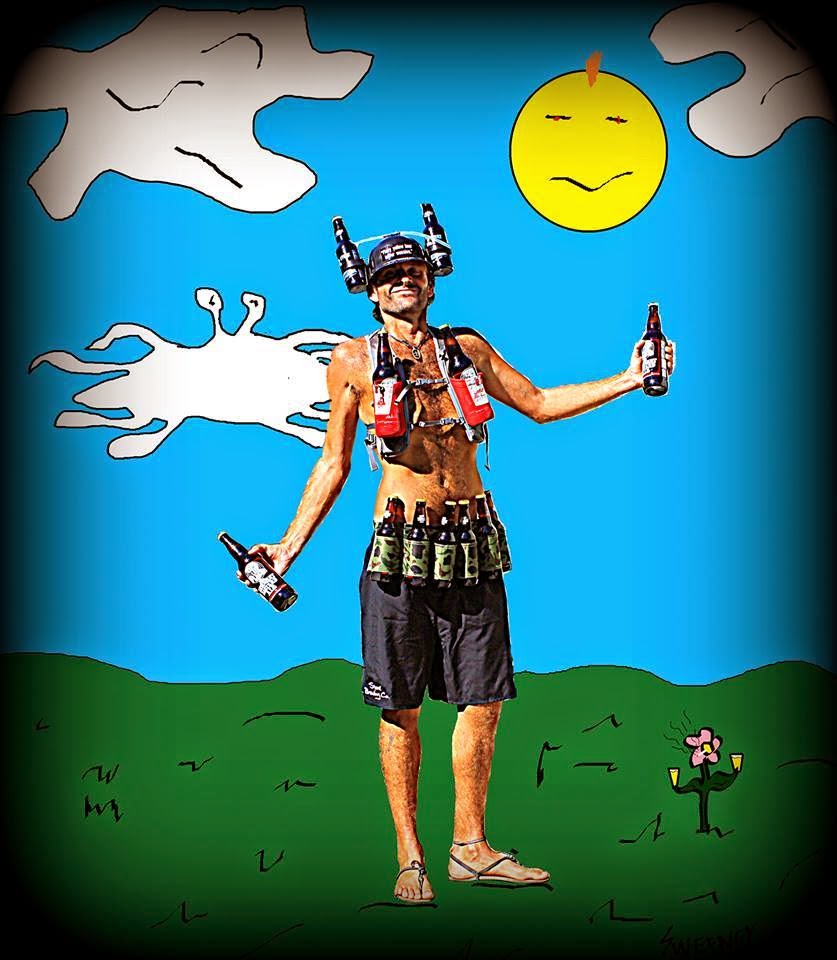 That ain't gonna happen any time soon  after winning my first 6 beer Miles with a P.R. of 5:56 my drinking skills have gone downhill I have been more focused on fun than fast.  I still have aspirations of winning the Hermosa Ironman (run a mile paddle a mile and drink 6 pack) which I'm good at (best 6 pack time 2:32) but I think the best I can get my beer mile time down to is 5:30.
I need to change it up a bit to rekindle my fire.

Well?
Back in the day I wasn't getting faster at the marathon. (always finishing around 2:55)  That's when I found out about the Ultra-marathon.  I changed my focus to distance rather than speed and a few years later when I came back to the Marathon I set a P.R. with a 2:37 without training. 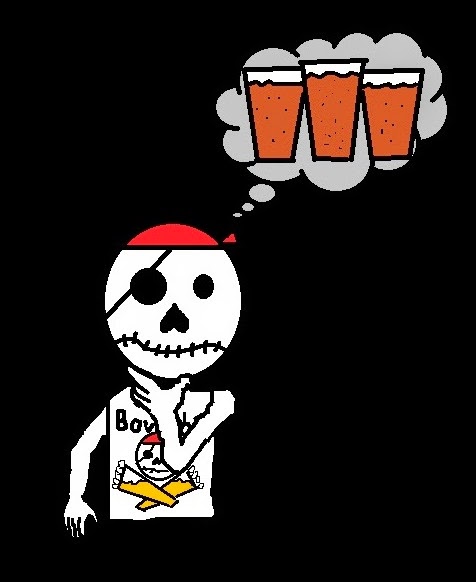 What if I applied the same sort of logic to my beer mile?
At first I thought about the 100 beer 100 mile challenge but that is a whole other level of stupid.  Beer marathon? I'll save that for another day. 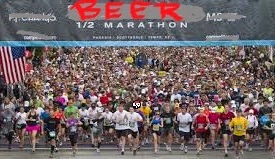 How about a BEER 1/2 MARATHON?
PERFECTO!
The best official non puking time I could find was over 5 hours according to Beermile.com. I figured I could beat that in my sleep but I'd end up peeing the bed.  It's probably a good idea to be be at least some what conscious.

I opened up big mouth and said I would attempt it at the 2014 Born to Run Shenaniganza. I put up the challenge hoping someone would try and race me but there aren't that many people that stupid 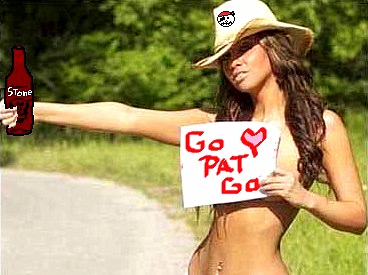 I arrived at the Born to Run Ultra-Marathon the Thursday before the Saturday race just after noon.  Southern California was in the middle of a scorching heat wave and the weather had to be in the mid 90's. 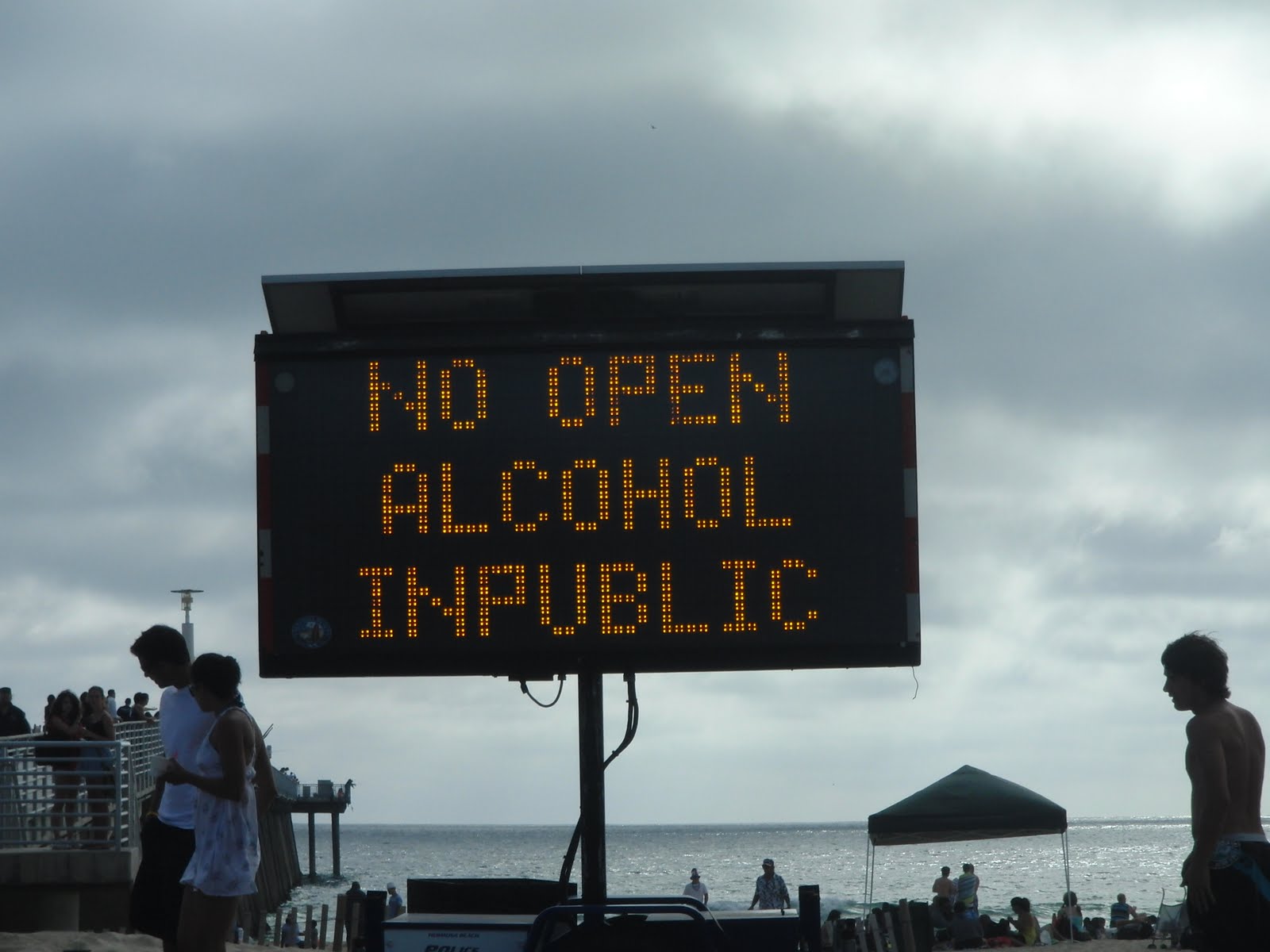 In the days leading up to the event I had been pondering doing the beer half marathon at the beach beforehand but then I would have to worry about getting arrested and making a fool of myself around strangers rather than friends.

By attempting the Beer 1/2 marathon here on private land at the Chamberlain Ranch it would be perfectly legal..  I was the 2 time defending champion of the Born to Run 50km and also the beer mile. I knew damn well that the attempting buffoonery would most likely adversely affect my state of well being in the days to come but Vicarism ain't easy!

RULES:
1. I must drink one 12oz beer  5% abv before running each of the 13 mile laps. (Plus a bonus .1 at the end)
2. If I puke the run is over over and I am disqualified from the event.
3. Burps and spit up of up to 1 oz of foam shall be permitted.
4. Peeing, blood letting, snot rockets, lactation and ejaculation are all permissible (but I only planned on pee and snot)) 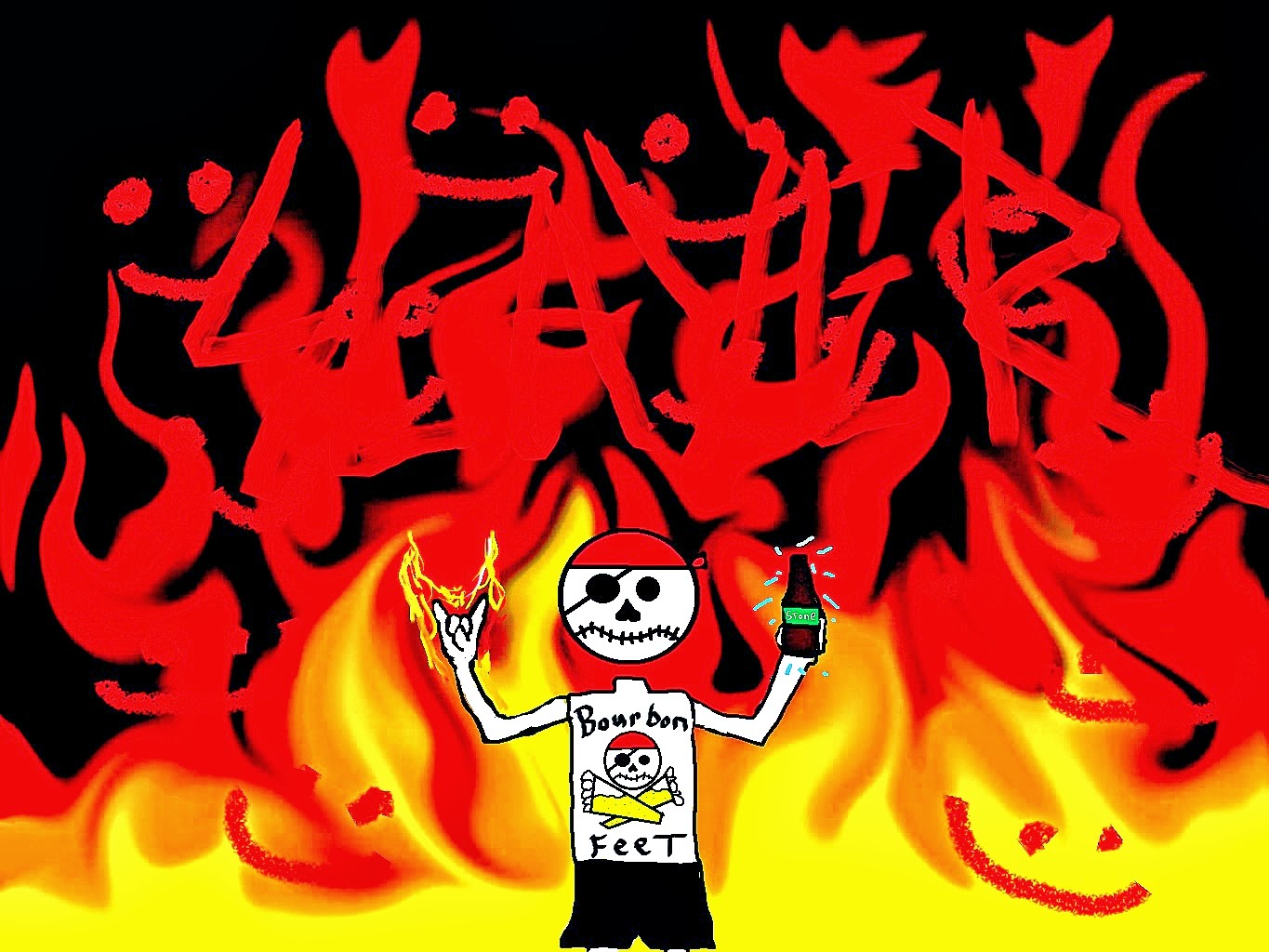 Do I really want to do this?
It was freaking hot outside and I was parched,
Game on: 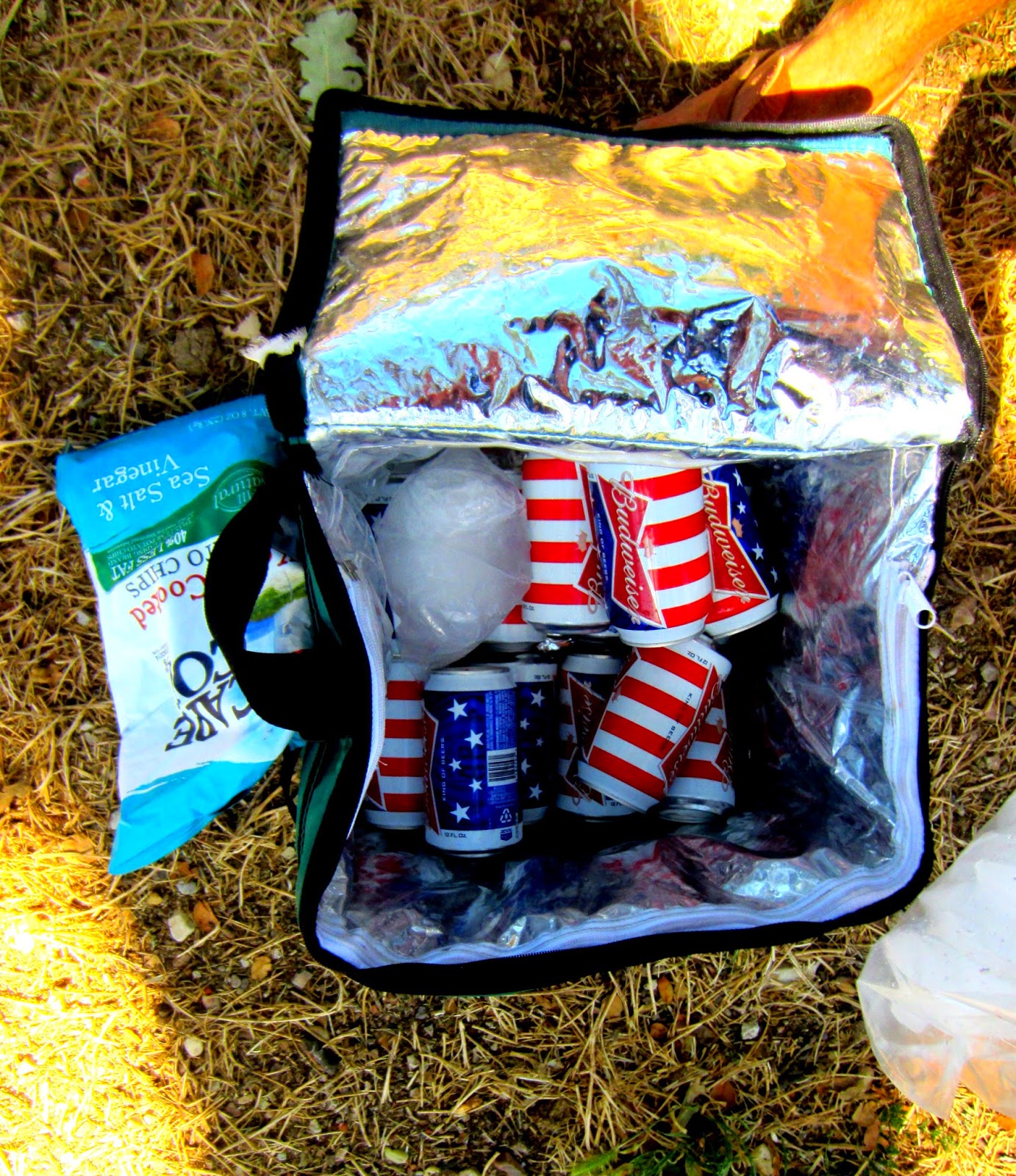 13 Beers and a bag of salt and Vinegar chips.
(No Water) 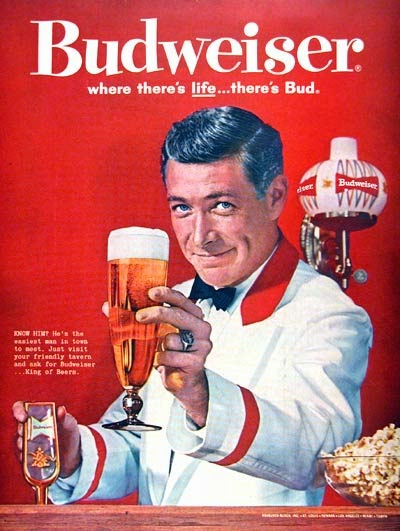 Budweiser?
Because it was cheap and 5% ABV.
As you may or may not know I run fro the "STONE BREWING COMPANY"  I wasn't sure if an spectacle like this would be good PR or not.  I had brought a couple cases of IPA and Arrogant Bastard' with me but I thought I would be better off sharing and enjoying those with friends later. 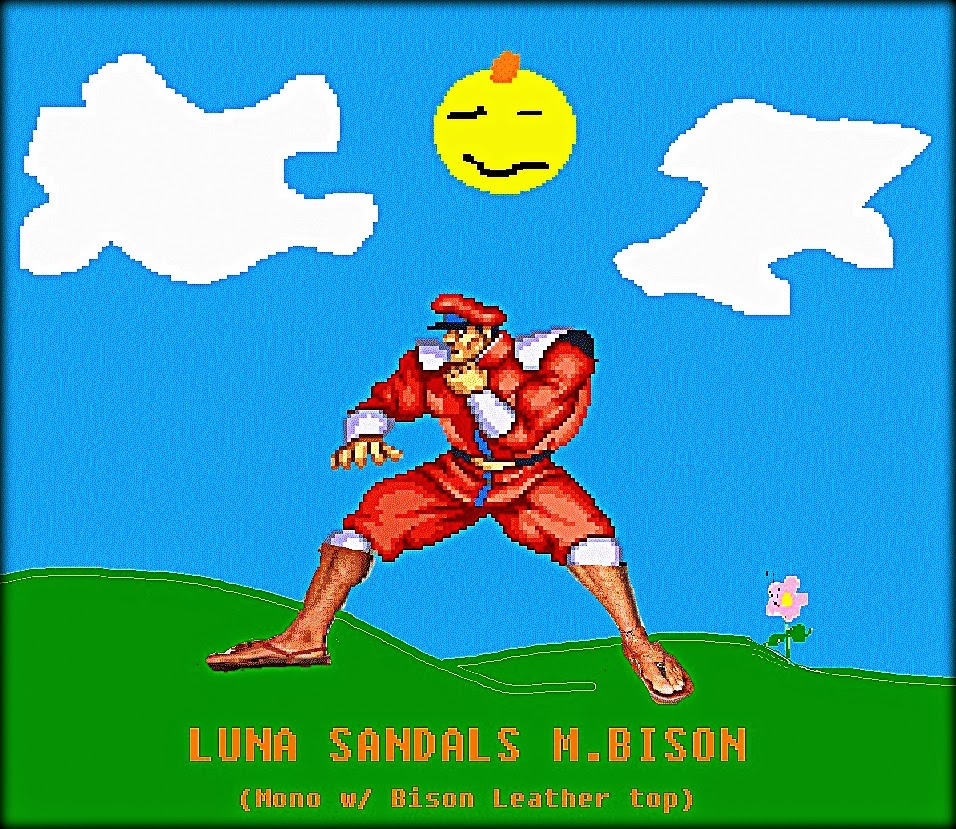 LUNA M. BISON SANDALS
These are my fancy sandals (Yes even I can be fancy) they are super comfortable and what where pretty much everyday if I have to wear shoes.  I had never raced in them before but since I would be running at a casual pace they would be perfect. 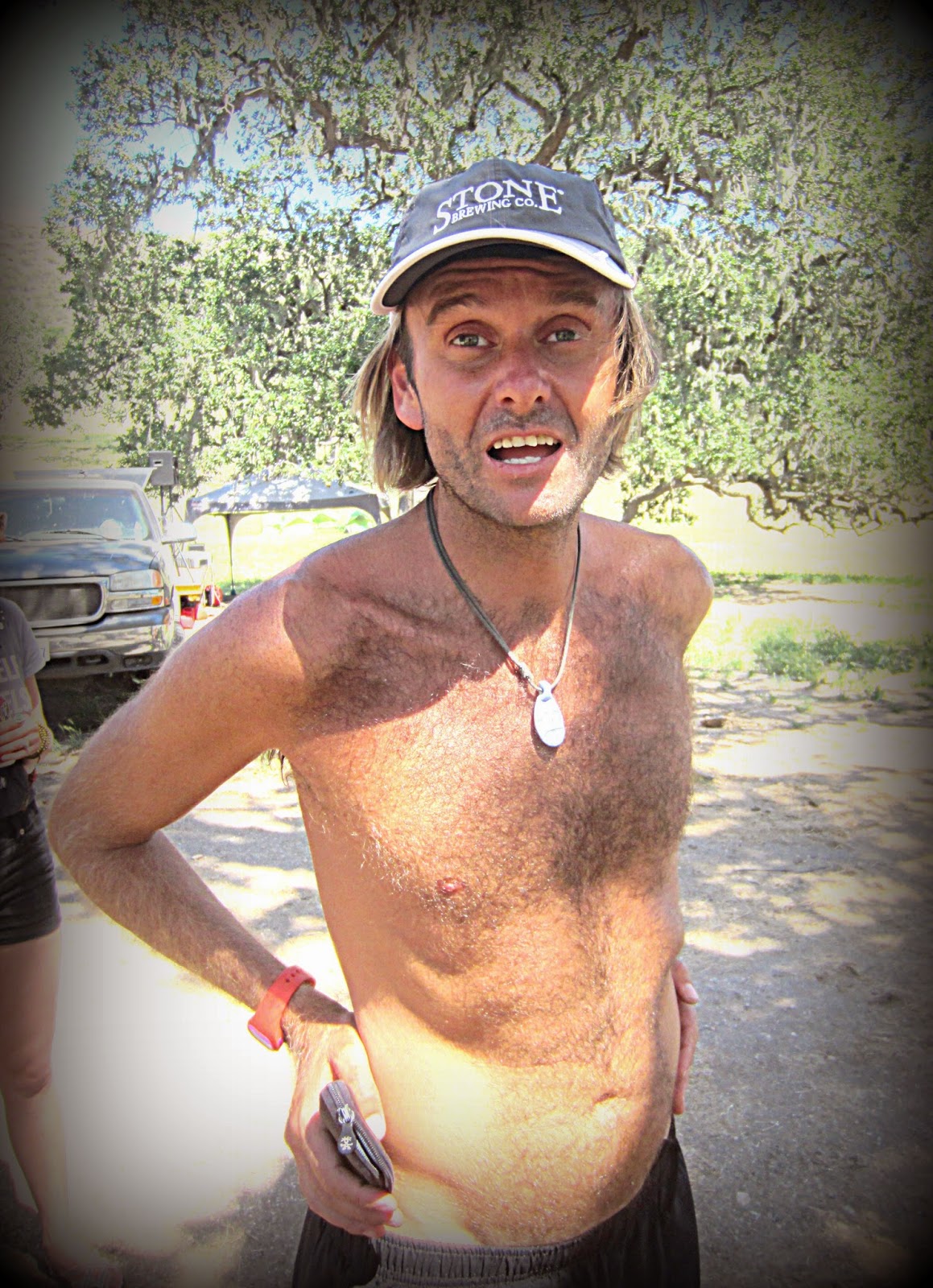 Is that the look of a confident dude or what?
At least I was thirsty. 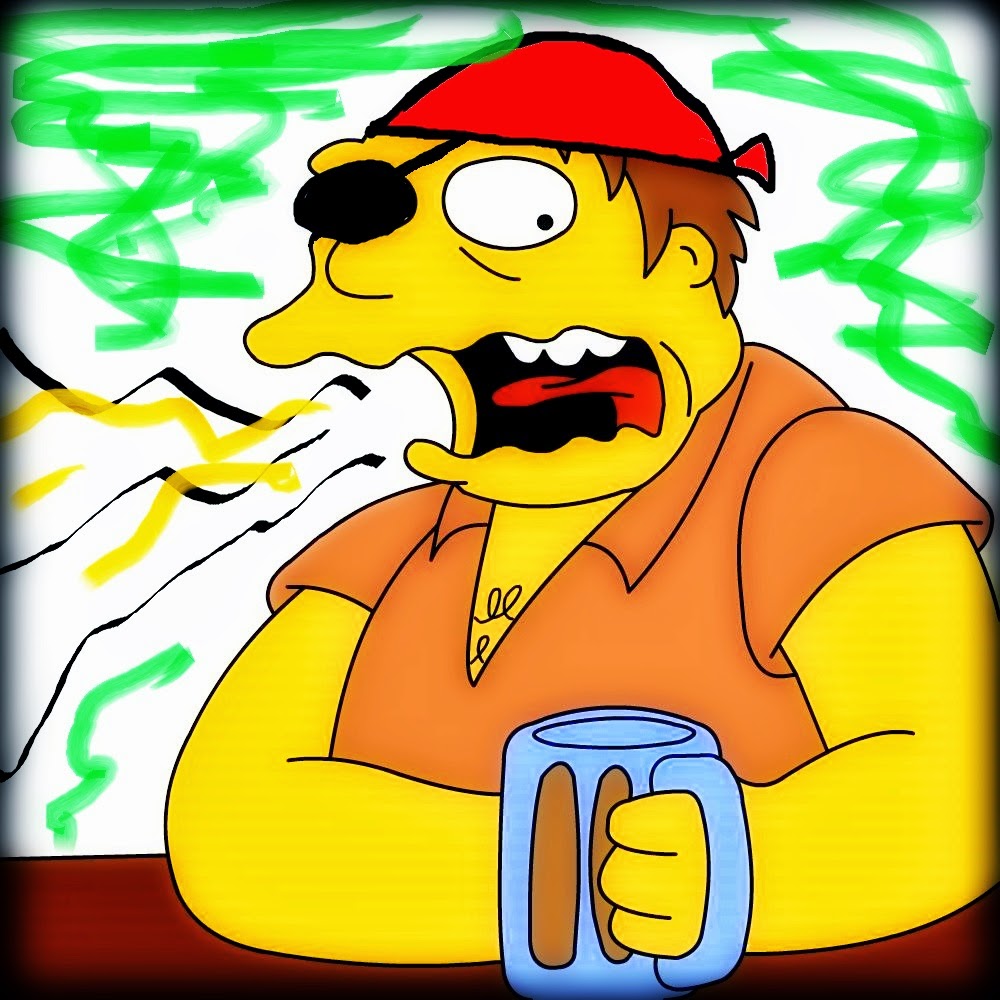 I wasn't  worried about being drunk.  I knew I would make a fool of myself but I do that when I'm sober as well.   I tend to be a happy drunk and I can't remember the last time I was surrounded by so many friends. Hopefully they will take good care of me? 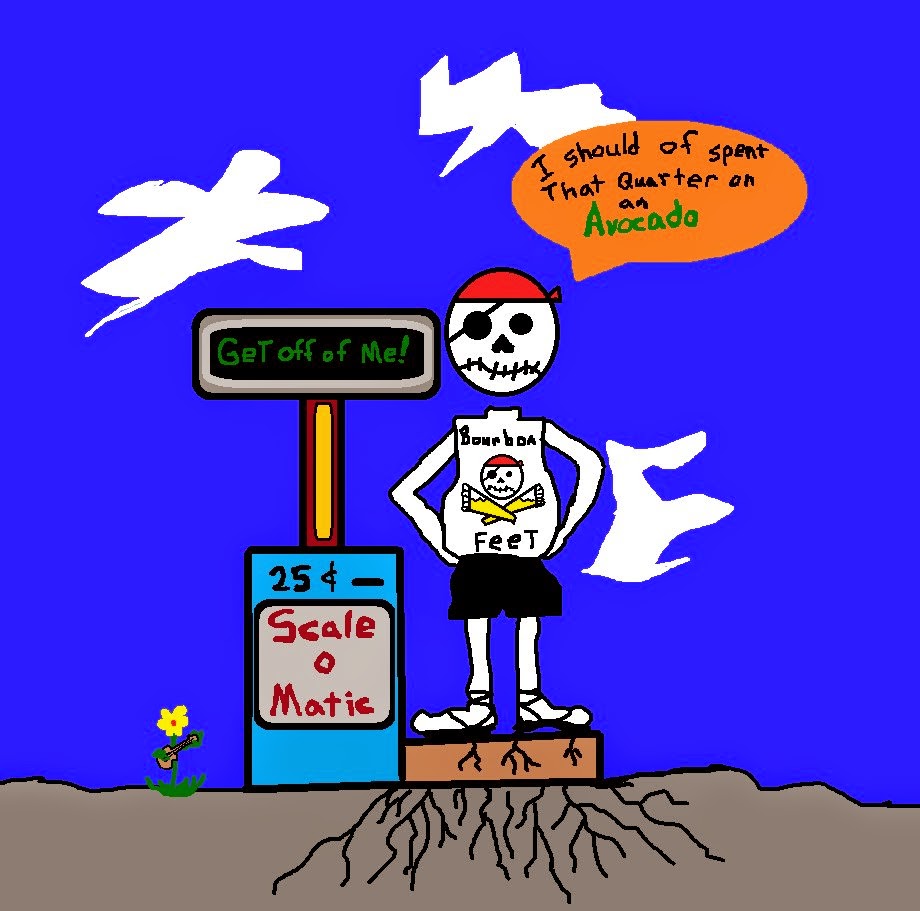 What worried me was how the hell I was gonna hold that much beer in my belly?

THE COURSE:
My buddy  Tyler went out and marked off 1/2 mile using Garmin 310xt gps and then also marked off .05 of a mile for the final .1 out and back.  The run would use the same starting line as the Born to Run Ultramarathon  and would have somewhere between 50-100 of elevation gain on every mile

Game plan:
I knew it wasn't gonna be easy and I wasn't sure if I was gonna succeed or not.. If everything went perfect I figured I could sneak in under two hours but that was a big if. The first 6 or so beers would be easy and the rest would be anything but.
CHUG-A-LUG
Everything started out great I was thirsty and really wanted a beer.  I figured there was no real rush to drink the beer at top speed (about 10 seconds) as long as I below 30 seconds I would be happy.
Beer 1 took about 15 seconds.
I was off and running at about a 7:30 mile running downhill into a very warm head wind.  With the tailwind running uphill it felt like it was over 100 degrees outside which made me very thirsty and eager for my next beer.
:) 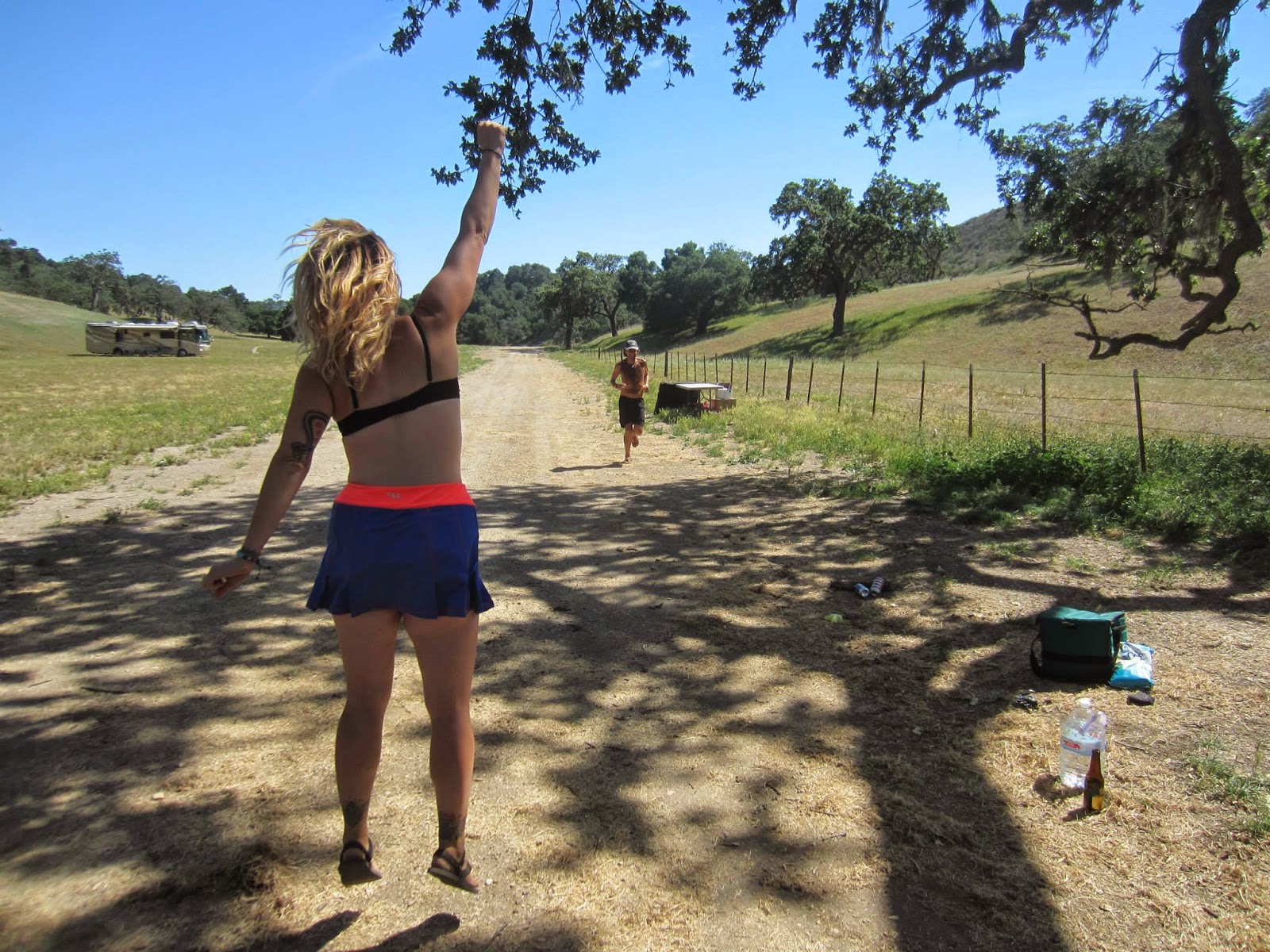 A group of about 10 to 30 people had showed up to watch this idiot get drunk.  I felt loved and it gave me somthing to look forward to every mile. 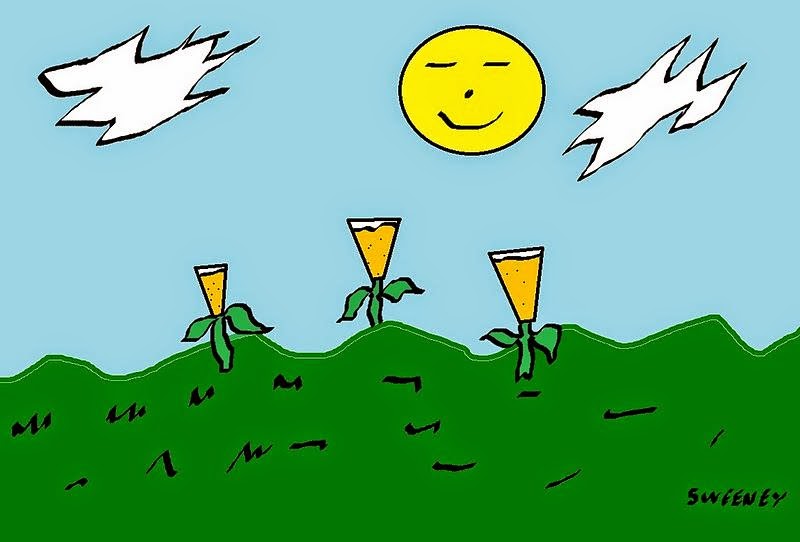 I finished my 4th beer and forth mile right at the 30 minute mark exactly as I had hoped.  At the time my cognitive abilities were still functioning and I calculated that if I ran slightly faster than a 10 min mile (including beer) I could beat two hours.  Running felt easy but monotonous I looked forward to the onslaught of drunkenness to help pass the time 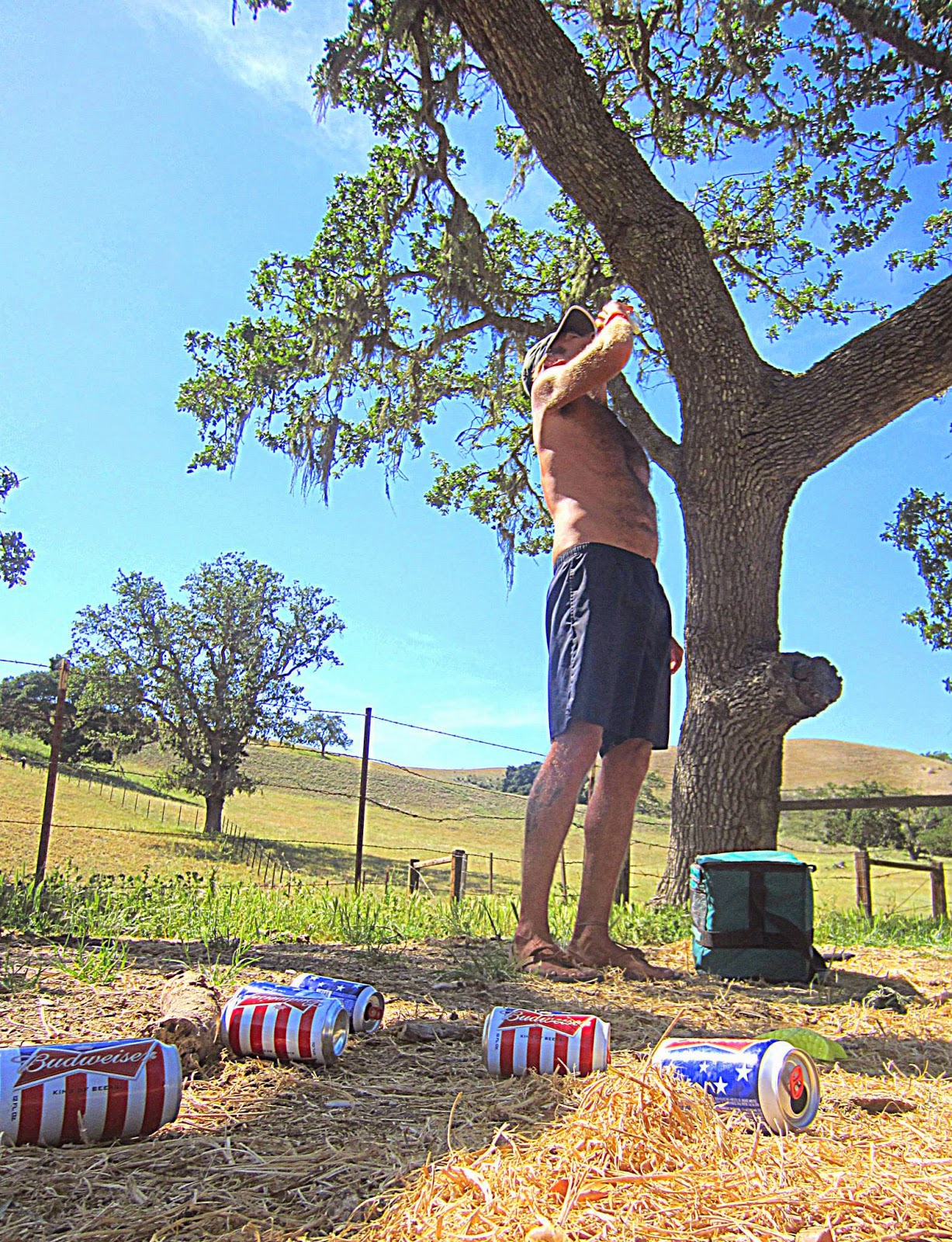 As my belly grew so did my buzz.
Never did I come close to puking.  I thought that I would be taking a bunch pee stops along the way unfortunately the only leak I took came during mile two and was just a small trickle from somthing I drank before the run.

After 5 beers my  friends started to join in the fun. 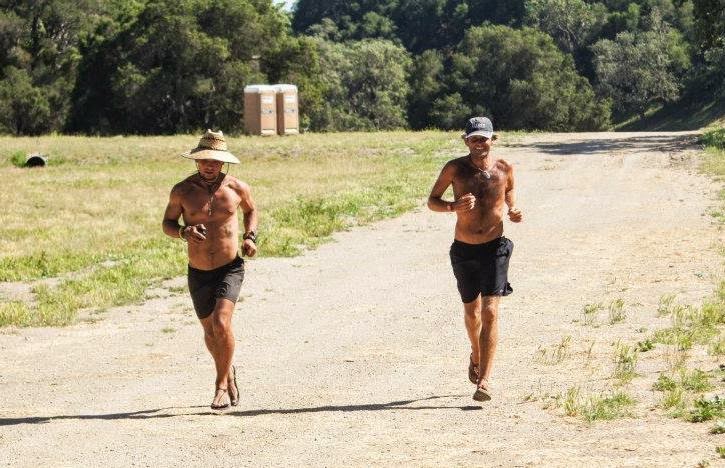 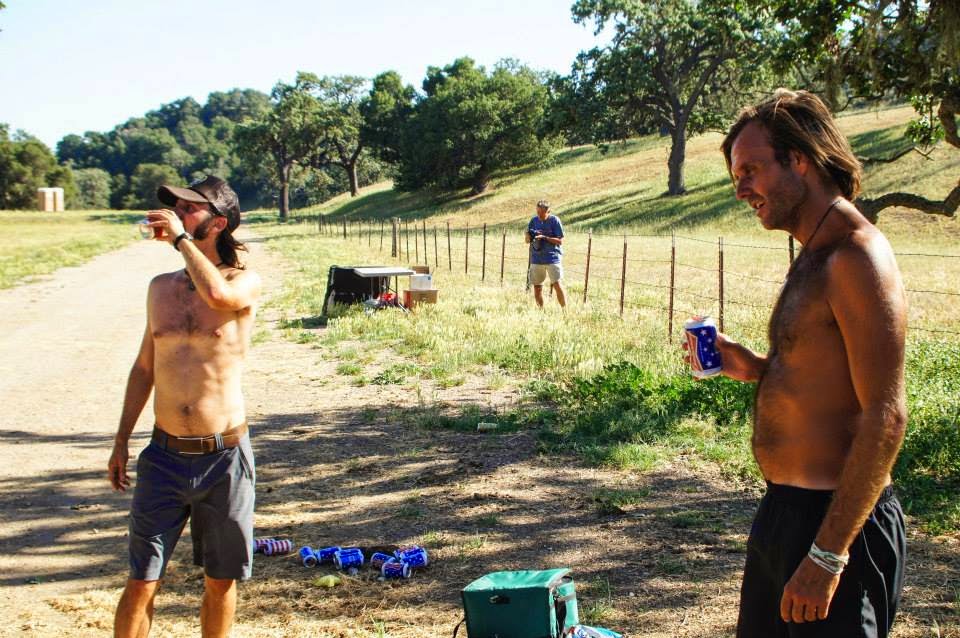 My buddy Chris joined in for a beer 10k
Running was no problem but by Beer 8 I had no more room in my belly. 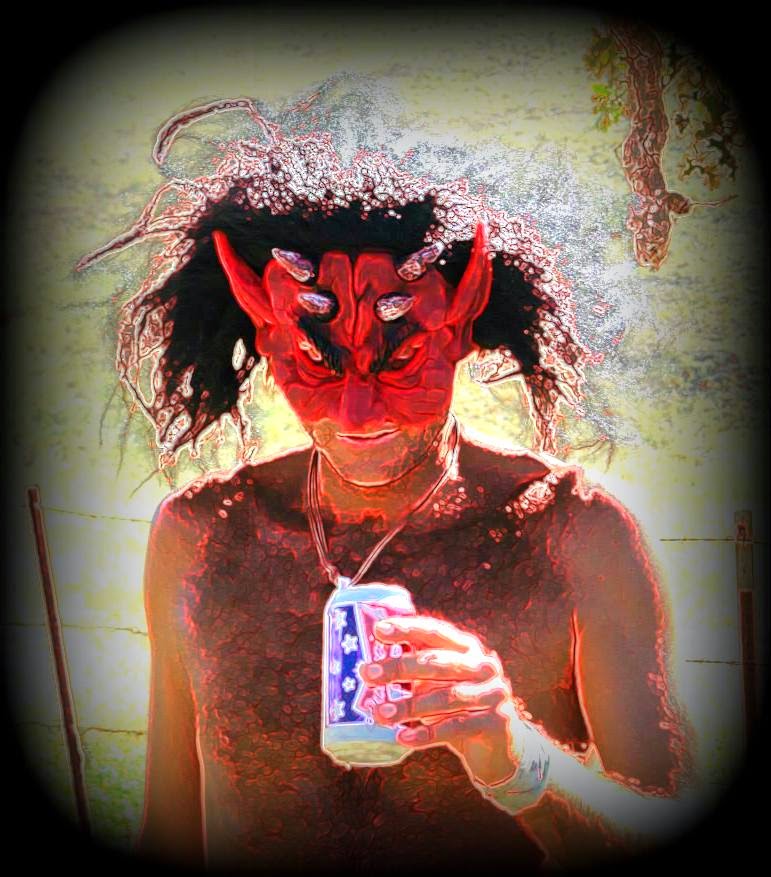 My drinking time slowed from 15-30 seconds to over a minute maybe longer.
Play time was over it was time to go to work. (The Drunkest guy in the office) So far I had been outrunning my Buzz but that would soon change. 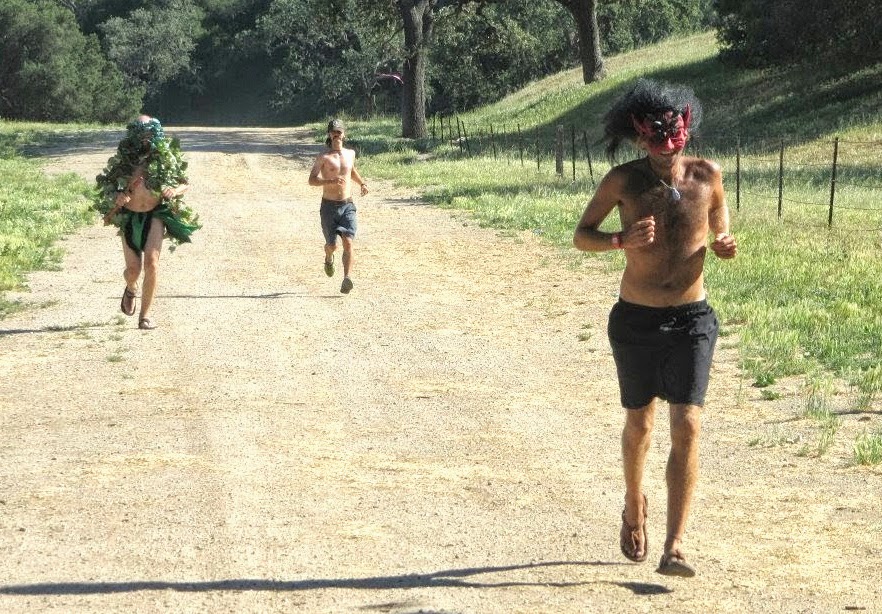 Things were getting weird and my memory is a little fuzzy. 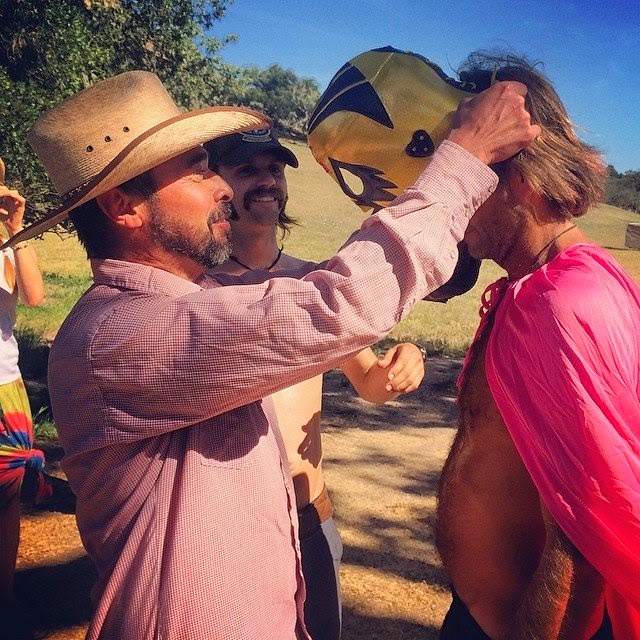 Next thing I know I'm wearing Luchadore costume. stumbling out of my beer coral trying to burp out some bubbles before running another mile 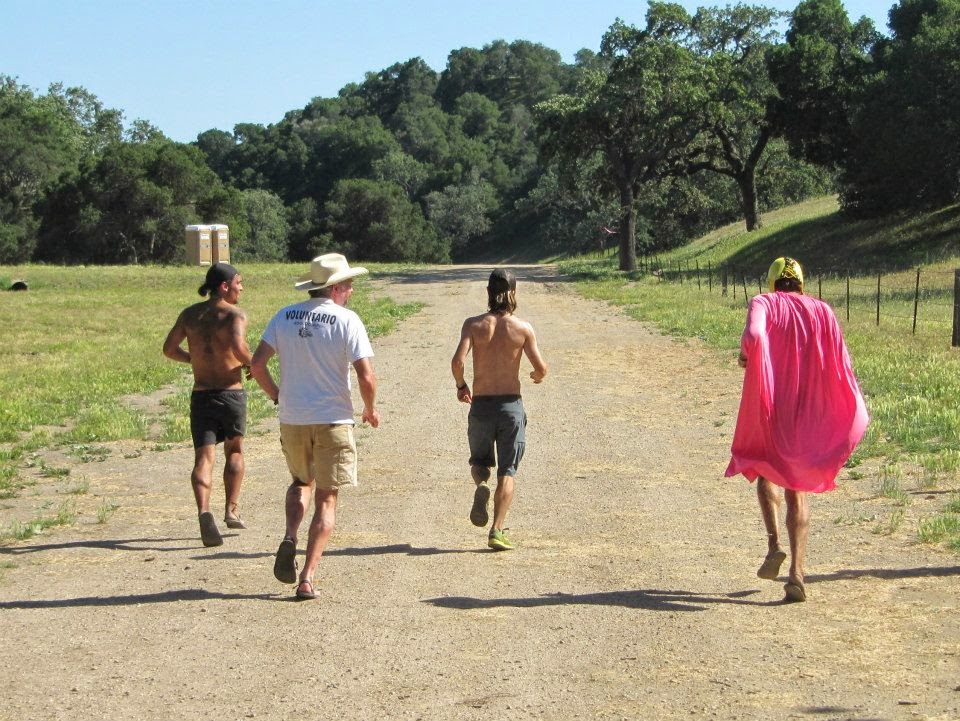 I was no longer concerned with beating 2 hours. I just wanted to finish. It took me a few 100 feet each mile to settle the beer but once I did was still capable of a 8 minute pace. 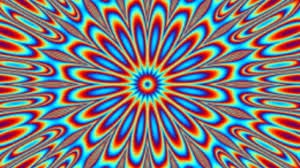 Beers 10,11 and 12, I have no recollection of. I remember coming in and finding just one more beer in my cooler.  I was so happy. The end was near and surprisingly beer 13 went don't almost as easy as beer 1.
I think I ran the last 1.1 miles pretty fast? 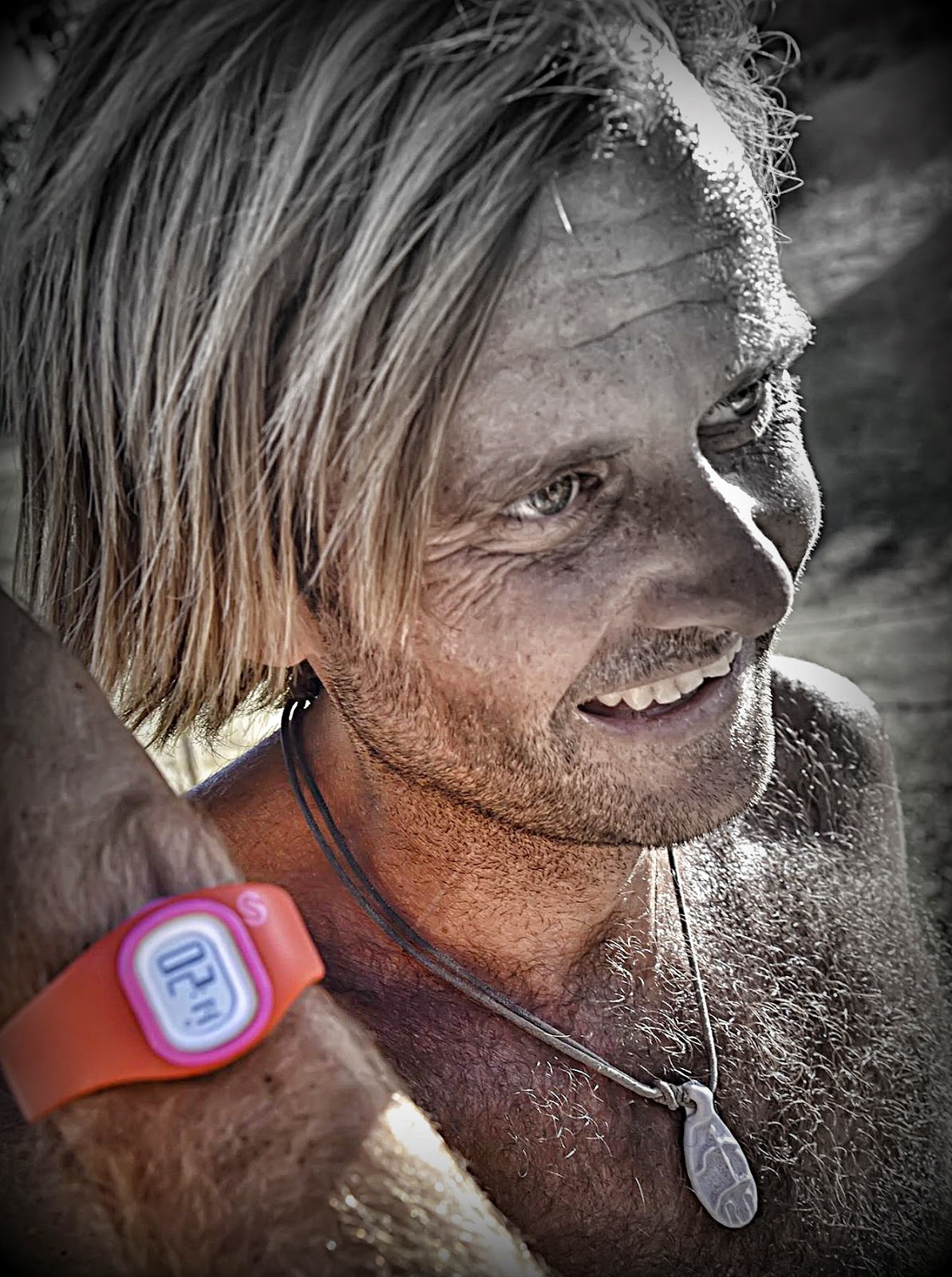 I stopped my watch with an official time of 2:14
(my watch isn't fancy enough to tell seconds)

As my fans surrounded me I remember being very happy followed by salty sweat flowing into my eyes
"AHH It Burns!" 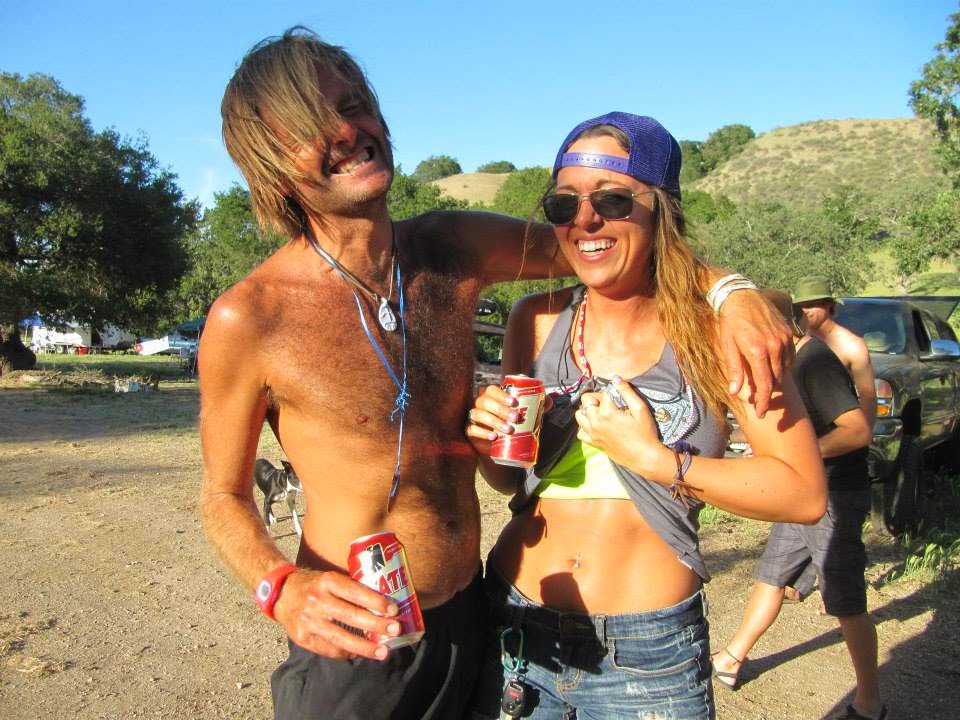 After that Who knows what happened? It look's like I had a good time. 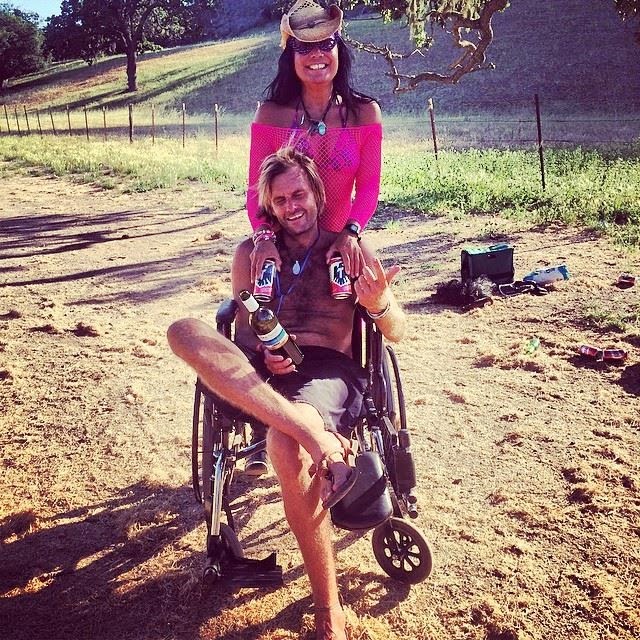 Living the dream I tell you 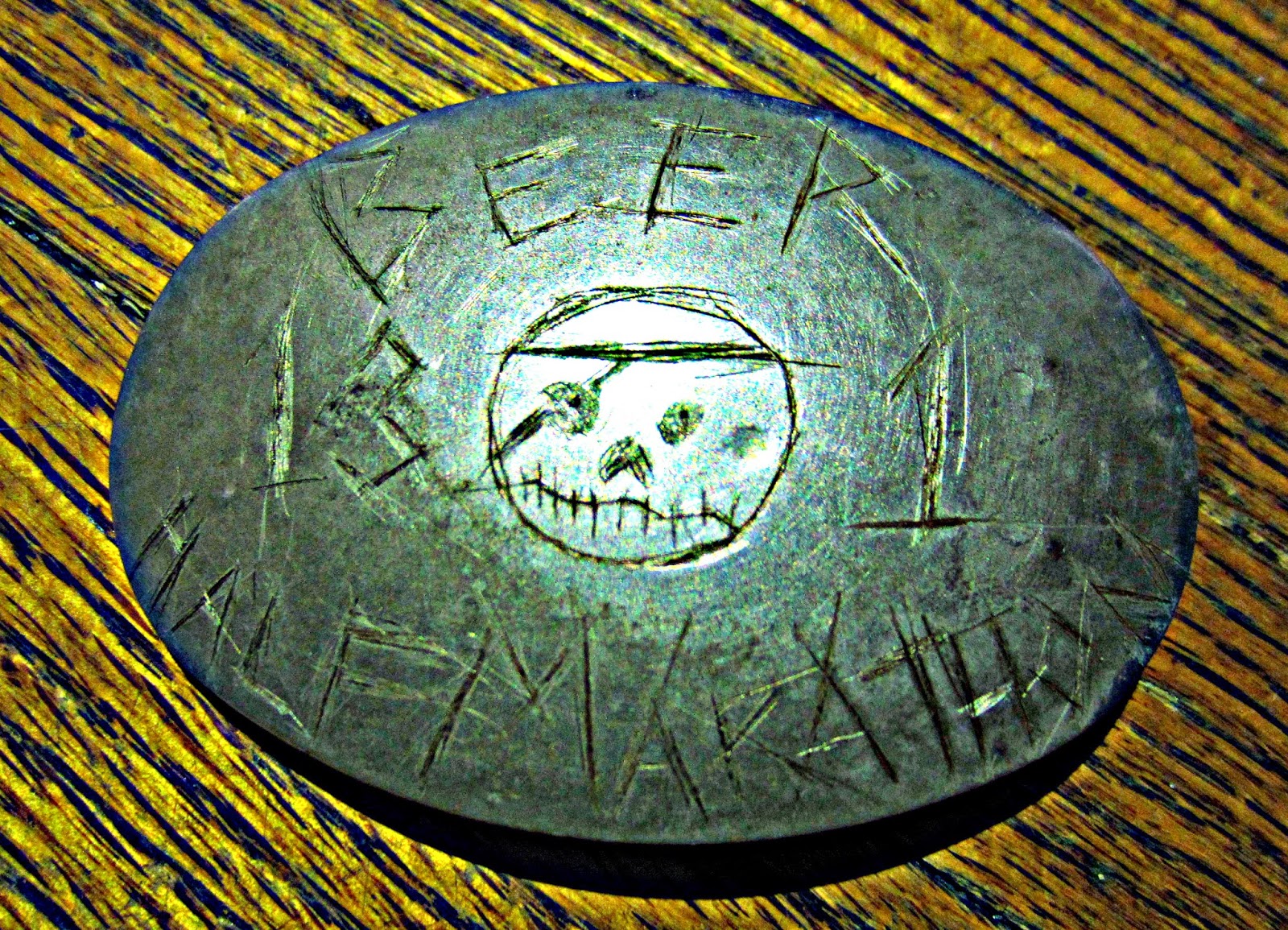 I was even presented with this one of kind hand crafted belt buckle designed by my good buddy Tecate Tyler.
It is one my most prized possessions. Way cooler than any Buckles I have won for running 100 miles
Thank You Tyler!

Next thing I knew it was 1 a.m. I woke up in my tent and instead of being hung over my stomach felt surprisingly good but my legs were trashed.

Thank you to all my friends at B2R for the love and support and for getting me back to my tent before I died.
:)

Epilogue:
Do not try this at home unless you are a drunken professional.  I achieved my goal of finishing and it was not easy.  Upon further research I have found 2 reports of others (it might be the same report twice I use the word research very liberally) finishing a beer 1/2 marathon in 1:29 but I know one involved puking and I suspect the other one did as well.

Along with the aid of Tecate Tyler the
I.B.M.A.
-International Beer Mile Association-
Is being established
and
2:14
Is the Beer marathon time to beat.
Good Luck
:) 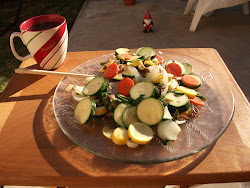 Found on the Beach 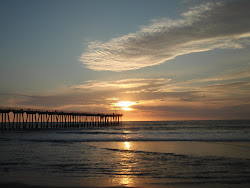 Found on the Beach

How to cook a human 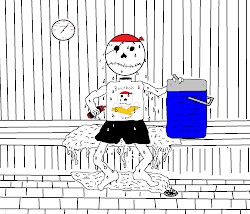 Drinking is an art form. It is not my goal to be Duchamp or Da Vinci. I am novice drinker and have a lot to learn. I like my crappy beer cold, my ale strong warm and hoppy, my wine red and my bourbon over 100 proof sipped straight.